I recently had a client come in who hadn’t been waxed for six months due to birthing a human out of her lady parts.

Very legit excuse for not having me rip hair off of said parts.

She brought her baby in with her, which was a super cute situation except for the part where I was thinking about how I was going to have a six month old baby girl watch me drizzle hot wax all over her birth place.

And also that I’m 103% more comfortable being around an alien life form than with a small, helpless human.

(Aren’t they kind of the same thing though? Let’s be honest.)

I really do like babies, don’t get me wrong.

But honestly. I am just literally the worst at it.

(You grow out of that, right?)

I’ve watched plenty of my friends get the baby fever/virus/plague and turn into a sappy puddle of goop whenever one is within five miles radius, but whenever one is put into my arms I more or less develop rigormortis and paranoia.

And whoever said babies don’t smell fear is a dirty liar because they most definitely start crying as soon as I touch them, and in the rare case that they don’t, it’s because they were slipped some Benadryl.

Anyway, the baby who I was about to give a wax show to started screaming bloody murder right before I went in to do the service.

Of course she did.

Fortunately, (and miraculously), the screaming wasn’t my fault, as the mom had accidentally punched her baby.

Because I will totally do that.

At least once every day.

Sorry in advance, little one.

So speaking of me being a super great mother someday:

Okay we rescued a puppy.

WE RESCUED A PUPPY!!!

The most adorable pup in the entire universe.

Not that I’m biased.

TELL me this is not the cutest little bundle of snuggles you’ve ever seen.

Don’t actually tell me. I will cut you.

Can we just talk about his eyelashes for a second?

Please notice how they butterfly literally 2 inches out from his eyelids.

Ladies, is this not the cat-eye we all dream of having???

Is puppy eyelash envy a thing because I kind of hate him for it.

…okay but I’m also the mom that goes, “YASS BITCH my (fur)baby is a model” every time someone dies over how adorable he is.

He’s super well behaved except for the part where he’s constantly nibbling whatever human body part is closest to him at the time, jumping over our fence to chase birds, cats, the UPS guy, etc., and chewing up all of my undies.

It’s always the lacy ones.

He’s got good taste, what can I say.

In our defense, we did get a shock collar recently to stop all the madness except that we soon realized our pup is a superhero when he jumped the fence this morning and was shocked repeatedly on full force for about five minutes with absolutely zero affect, while my saint of a boyfriend ran around the neighborhood trying to catch him.

But I guess it also could have been that, (helpful hint here, guys), the shock collar works a little better when you TURN IT ON.

….Okay but other than that he’s super well behaved.

(Extreme cuteness counts for something too, right?)

….and the Wisconsin Badgers.

His least favorite things include birds, bicyclists, leashes, and his brother, Marble.

Now, I don’t want to be the mom who keeps posting a zillion pictures of her baby, because THEY ALL LOOK THE SAME (but omg he’s totally winking at me in this one!!!), so instead I’ll just leave a video of him getting slapped by Marble.

And speaking of Marble, here’s a video of him slapping ME.

FYI the slap sound IS real and my neck 100% looked like I was attacked by a rake.

I deserved it though, clearly.

It’s hard to imagine life now without our little band of misfits.

…except that sleeping would be a lot more peaceful, considering Marble demands to be spooned by one of us every night (ALL NIGHT) and will walk all over your face until you comply.

Okay so I guess I can imagine life without them.

But we can’t imagine going back.

I KNOWWWW….the sappiness leaks out sometimes, I can’t help it! 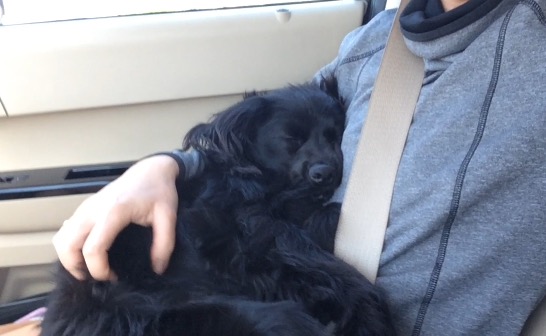