Two years is an awfully long time to live without you.

You left at such an inconvenient time.

The Seahawks won the Super Bowl. I know, I couldn’t believe it either. I wanted to be really excited about them finally going all the way, but right after you died? They couldn’t have waited a year?

As if happy things shouldn’t be allowed to happen in the wake of your death.

But happy things did happen.

Life is funny that way, isn’t it?

Unexpectedly, I met someone who has so many of the precious qualities that I loved so much about you. He’s my best friend, and would give you a run for your money when it comes to razzing me.

No wonder I feel like I won the jackpot.

Why aren’t you here to hassle him about where his sports team loyalties lie, and teach us both how to fish?

But merely a fraction of the amount of time I will endure missing you.

Your death has never been a question of whether or not I will survive it. The question that haunts me is why you didn’t get to.

Maybe I would find more peace if I believed in the concept of religion, or a preconceived idea of why my 27th year included you dying in my arms.

I just don’t buy it. “Meant to be,” and “A bigger plan,” are not answers I am soothed by. I don’t think there is a Godly answer for why you were taken from me, from all of us.

The truth can be hard and sticky and complicated and heartbreaking and unfair.

Life is funny that way.

You were drafted in the Vietnam War before you were even allowed to legally buy yourself a beer.

You carried your best friend through rice paddies in the middle of the night, exposed and vulnerable, after he was shot and killed. Only the stars lit your way out of the battlefield.

You have known real fear.

You have known true courage.

The war exposed you to Agent Orange, a chemical that, forty years after all the fighting has ended, is still devastating veterans and their families.

Can you blame me for my anger, Dad?

You have felt the kind of fear that only a soldier feels.

You have known the kind of courage that only a soldier ever has to find.

And you have seen the kinds of things that only a soldier ever has to see.

And yet, I grew up with a father who never complained about the effects war had on him, or the pain that it would later instill through multiple cancers and countless chemo treatments.

And instead of asking why; instead of being bitter and resentful, you made peace with your life and with yourself.

(It would really help the whole “Where would you like to go for dinner?” process.)

I was so angry when you told me you had accepted what was happening. So angry that I could feel my blood boiling and the lump in my throat cutting off my ability to breathe; I felt the heat of my tears streaming down my face and the redness radiating from my cheeks.

I was not ready.

I did not accept it.

But you did. And you were so graceful.

When have I ever shown that much grace in the face of such hardship?

The only thing I ever remember you longing for was to make it to your sixty-fifth birthday.

You died 29 days before it.

But alas, life is funny that way.

I read somewhere that our memories are not of the actual event that happened, but only of the last time we remembered it.

If that’s the truth, what an awful one to bear.

Which tiny, indiscernible detail is left out each time you come into my thoughts?

How many thoughts of you will I have before all I’m left with are broken, abstract memories of life as I knew it?

But I search my mind for original moments of you and squeeze my eyes shut as I try to focus in on the details of what you looked like and how you smelled when you’d get home from working in dirt and grass and oil all day, and how your calloused hands felt when I held them.

Sometimes I hear a phrase that you used to say and I stop and imagine your voice wrapping around the words.

I can still hear your voice as if you were standing next to me. Sometimes on my way home from work, I turn down the radio and fall into imaginary conversations with you.

There is just so much to catch up on.

I was not your child biologically, but it didn’t matter. You were mine and I was yours and there is no one on this earth that I identified with more than you.

You were fiercely my protector, and always my biggest fan.

You were kind. You were selfless. Your work ethic was unmatched. Your sense of humor and childlike sense of play made me the luckiest to have a childhood with you in it.

You were the father that mothers hope for, and the daddy that little girls dream of.

For shooting hoops. For drives to the beach. For singing along. For lifting the heavy stuff. For pushing me. For not pushing me. For letting me be a dreamer. For calling me on my bullshit. For believing in me more than I believe in myself. For laughing at me. And with me. 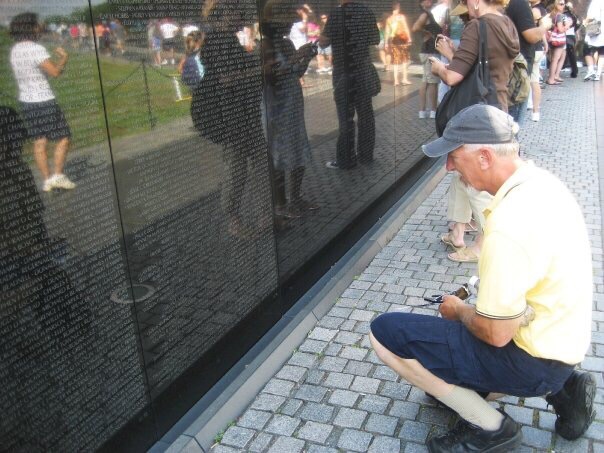