It’s okay dude, I’m not trying to blog right now or anything. Take your time. 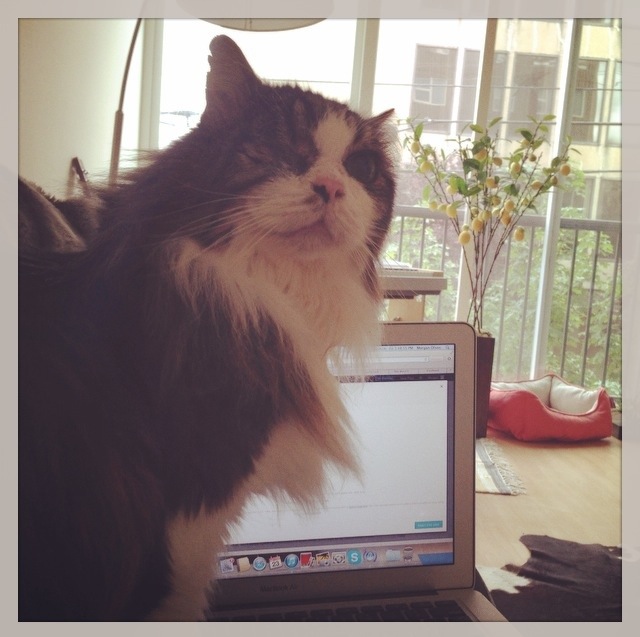 World, meet my one-eyed fluffy snuggle monster (also known as my Maine Coon rescue kitty). You really only need one eye anyways, is what I always say. I mean, unless you want to have any depth perception.

Glaucoma took one of his eyes and will hopefully not take the other but don’t worry, I’d obviously get him a service dog. Feel free to assume that he’s just permanently winking at you, though, if it boosts your ego. I do that sometimes.

His name is yet to be determined, so for now I just say whatever ridiculous babble comes out of my mouth…like Mr. Magoo, or Pickles, or Stitch McGiggles, or Puffywittlebabylionsnugglebunnyboobear.

One of my girlfriend’s thinks I should name him a slang term for penis, since they also only have one eye (you’re welcome for the anatomy lesson). This is an incredibly inappropriate and offensive suggestion.

So clearly I said, YES obviously I will do that. Oh and also, our wine glasses are empty.

He’s not quite sure about me yet, but I don’t really blame him. I’m kinda weird, but only if you consider weird to be things like having full-on conversations with yourself about which yogurt you’re going to eat for lunch, or vowing to only get around your apartment that day via sliding across the floors in your socks.

He spends most of his time being terrified and hiding behind the toilet, but if he really wants something from me he’ll sprawl out on my bed. Men. They’re all the same. 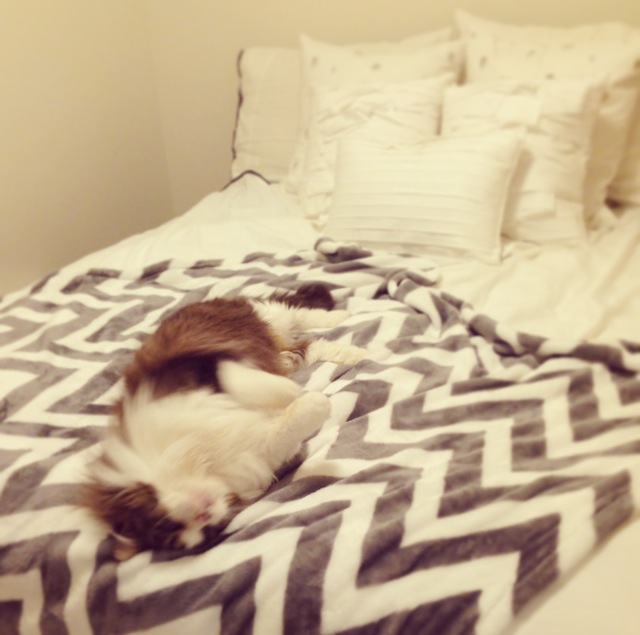 …and if I stay on his right side, he can’t see my wrinkles or judge me when I’m elbow-deep in a bag of jalepeño chips, so it’s a really good match I think.

I know I’m not a crazy cat lady because I got to spend three hours with the foster-mom I adopted him from, and I am telling you what, folks. This woman needs her own reality show. I’m guessing she’s  the sole reason that the term crazy cat lady was coined, and since I do not currently have five cat trees, seven scratching posts, ten litter boxes, twenty-two food bowls, five million cat toys, or “MEOW” stickers on my car like she does, I am considering myself in the clear.

Except that I currently do own two scratching posts because I forgot that I already had one and so for the moment we’ll say I’m at 26% CCL.

The only thing that really changes when you have a feline is that now you wake up with a cat on your face.

And sometimes you unknowingly walk into a coffee shop with a giant gob of their hair on your bum….which is super cute, and helpful in attracting other slightly weird, pet-owning guys…?

Don’t end up in the hospital with an IV in your arm and being forced to eat an orange popsicle. Not that I’d know anything about that.

I promise to have my second Costa Rica blog post up really soon, if this fluff ball ever gets off of my keyboard.

One thought on “(Not) A Crazy Cat Lady.”