My new ‘hood is one that I’d always thought was kinda lame (for absolutely no good reason).

I’m now only blocks away from the beach, and the best doughnut shop in Seattle.

My main man, my older man, and my baby…man. Baby man?

Anyway, only one of them is human, which I guess would be a good time to mention that WE GOT A PUPPY!

I can’t write about our newest addition here though because he needs his very own post, obvi, but my Instagram page is now ALL puppy pictures — I’m so sorry. Feel free to unfollow me. I totally turned into THAT girl and I hate myself for it. That being said, our new pup is fucking adorable so YOU’RE WELCOME FOR THE EXPLOSION OF CUTE.

But back to moving.

We decided to hire movers. Not because my bank account is overflowing, it’s obviously not (thanks a lot, Zara/Sephora/Urban Outfitters, you bitches. God, I love you guys so much). I was willing to fork over the dough to hire movers though, because when I moved to my last apartment, the physical and emotional trauma that hauling 16,000 boxes in and out of a uhaul took on me is the sole reason why it then took me 9 whole months to gain enough motivation to actually unpack all the boxes and decorate my place.

Lazy could also be a reason.

So hiring movers is awesome, except for the part where they were 3 hours late and it was Friday afternoon with rush hour traffic and they didn’t end up leaving our new place till eleven-fucking-thirty PM. BUT, I did not throw out my precious vagina-waxing shoulder from lifting and pushing and kicking and punching six million pounds of knick knacks. So it was worth it. Also, I ordered pizzas for all of us and you better believe I stuffed my sailor’s mouth full of an inappropriate amount of mozzarella grease and questionable pepperoni’s, which made the whole 3 hrs late/bad traffic/super expensive issue just float right out the window (along with all hopes of being bikini ready by our upcoming Mexico trip).

The struggle is real.

The movers DID seem to strangely “forget” to pack my box of undies, though…which was a super fun issue to come across at 6:30am the next morning.

Now about these “toggle bolts.”

Seriously. What the fuck, you guys.

Have YOU ever heard of a toggle bolt?

All I want to do is hang some damn pictures in my house and apparently we have metal studs or that’s my assessment anyways from making massive holes in the wall with a power drill without any success of hanging anything because I DON’T KNOWWW.

Mind you, my Voice of Reason (and better half) has been kindly encouraging me to talk to someone at Home Depot first but thanks to my father passing along his stubbornness to Yours Truly, I have been hell-bent on hanging these all by myself and also because HELLO, POWER TOOLS ARE FUCKING AWESOME GIVE THEM TO ME NOW.

Suffice it to say, there are more holes in my wall then there are pictures on it, and Google’s recommendation of using toggle bolts has only further enhanced the failure, but you better believe I will Tim the Tool Man Taylor my way through these  minor setbacks.

Let’s get real for a minute though, because our new house has a laundry shoot, so being frustrated at anything for very long is nearly impossible. A LAUNDRY SHOOT, PEOPLE.

Also included with the house were two raised garden beds.

Let’s see: fresh veggies and fruits and flowers and cute gardening gloves and “Here, neighbors, have some fresh blueberry pie I made from berries that I planted in this earth and also please don’t hate us when Sawyer poops in your yard.”???

So I decided to put on my gardenin’ hat and do what I had helped my pops do every year growing up.

Turns out it’s a little harder when your dad isn’t here to swat the spiders off of you while you stand paralyzed in fear.

And also harder because peat moss/mulch/compost/lasagna-method/vermiculite/topsoil/native-soil WHY SO MANY TYPES OF DIRT-THINGS TO CHOOSE FROM????

Also. Shoveling dirt is hard. I mean, I know dirt is heavy, but Jesus Christ.

I did it and I heard my dad through all of it.

I heard his laugh while I swore at spiders and all the dirt and compost and peat moss I had to shovel and rake.

And I heard him telling me about all the different fruits and veggies I was planting as I dug each hole and sowed each seed.

I didn’t know whether to laugh or cry or curse at the fact that he’s gone or take a deep breath or just lie down in the grass and be still.

So I did all of those things.

And in the end I had this. 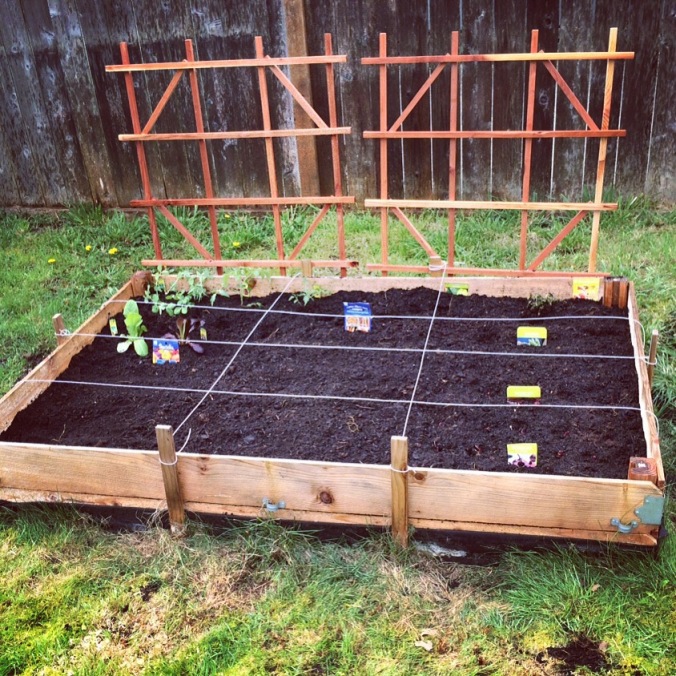 And no matter what grows (or doesn’t), we did it together.

And it felt really good. And that’s enough.